Types of Solar Panels - How to Choose The Right Panel?

Every homeowner who is the slightest bit environmentally conscious, and would like to save on utility power bills, is looking to go solar. But even as you plan to take the plunge and embrace this eco-friendly source of energy, you know you will not just buy the first home solar energy system you come across, will you? Certainly not.

You ought to know more than anyone, the different types of solar panels on the market. Investing from a point of information will make it a cinch easy for you to single out the best type based on your energy needs, budget, and type and size of roof among others.

Different Types of Solar Panels - Which Panel is The Best?

Whilst they are all tasked with capturing energy from the sun and turning it into electricity, solar panels are not all created the same. Photovoltaic panels (PV) are categorized into three common types, Monocrystalline Panels, Polycrystalline, and Thin-Film Solar Solar Panels. In detail, let’s look at each.

Monocrystalline solar panels are the earliest form of PV energy systems and date back to the 1950s. They are the most preferred and predominant type of solar panels thanks to the higher energy conversion efficiencies. These panels are also more resilient to high temperatures and have a longer lifespan of up to 30 years. 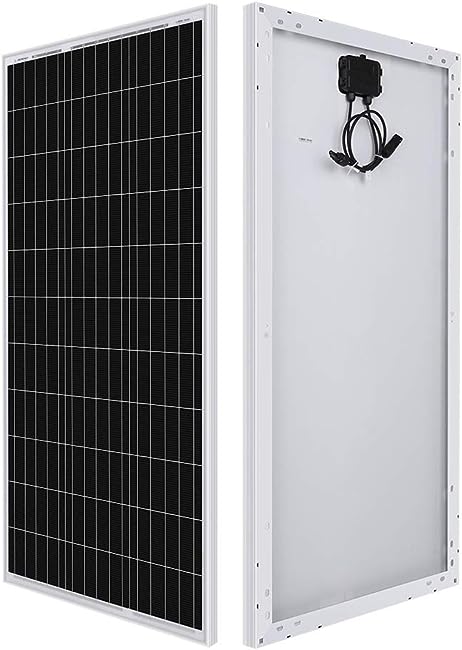 How are Monocrystalline Solar Panels Made of?

As with any other type of solar panel, they are made using a semiconductor material, silicon for the most part. Silicon is preferred courtesy of its durability, abundance, and low cost of acquisition. And as the name indicates, the entire volume of a photovoltaic cell is made from one crystal of silicon.

Silicon is seldom pure in its natural state but exists as silicon oxide. The most commonly used forms of naturally existing silicon dioxides are quartzite gravel, which is the purest silica, and crushed quartz. These oxides are extracted as minerals from the ground. Thereafter, Silicon is extracted from the oxides and cleaned and purified into 99% pure silicon.

The pure silicon is then treated with phosphorus to add the free-electron count. Boron is also diffused into silicon to create deficiencies of valence electrons. This addition of foreign material is called doping. It helps increase the conductivity of the semiconductor.

The silicon is transformed into single crystals of the very pure crystalline silicon (c-Si) through the Czochralski process. The process entails melting the doped silicon and adding a seed crystal.

The single silicon crystals are then built into cylindrical silicon ingots or bars. Using diamond wires, the ingots are then sliced into sheets or wafers that make the octagonal photovoltaic cells on the monocrystalline solar panels. Metal conductors are then imprinted onto the PV cells to collect the produced electricity.

To prevent the shiny silicone cells from reflecting sunlight and make them more productive, an anti-reflective coating is applied (titanium dioxide or silicon oxide in most cases).

The result is a sleek and more attractive panel with uniform dark or black cells. The silicon wafers are octagonal-shaped with corners that appear cut off.

Monocrystalline cells are much more efficient since they are made from single crystals which allow more room for movement for the electrons responsible for generating electricity. Among all types of solar panels, monocrystalline cells have the highest efficiency rates of 15 – 20%, with more modern models boasting impressive efficiencies of 22% or higher.

The high energy conversion rate is attributable to the pyramid pattern which provides a larger surface area for collecting more energy from the sun’s rays. On top of that, doping increases productivity, an anti-reflective layer reduces reflection and as a result, increases absorption and efficiency.

One downside of monocrystalline panels is the high price tag you need to pay upfront to buy them. They are more expensive to acquire due to the high cost of producing them, although their high power output and efficiency justify every extra dollar you pay. Save for periodic cleaning and inspections, they require minimal maintenance.

When to Use Monocrystalline Solar Panels

Courtesy of their high efficiencies, considerably small solar panels can produce a substantial amount of power. So, the panels are widely used in the following setups.

Polycrystalline or multi-crystalline solar panels may not be as widely used as monocrystalline, but they are still a firm favorite to many solar energy users and are forecast to continue to grow in popularity.

Although they have relatively low energy conversion efficiencies, they are cheap and go-to options for homeowners who are short on cash.

The best part, these panels are flexible.

Besides, while their single-crystal counterparts are black-colored, multi-crystalline PV cells are usually blue and a little bit speckled. They have square cells that are not cut off around the corners. 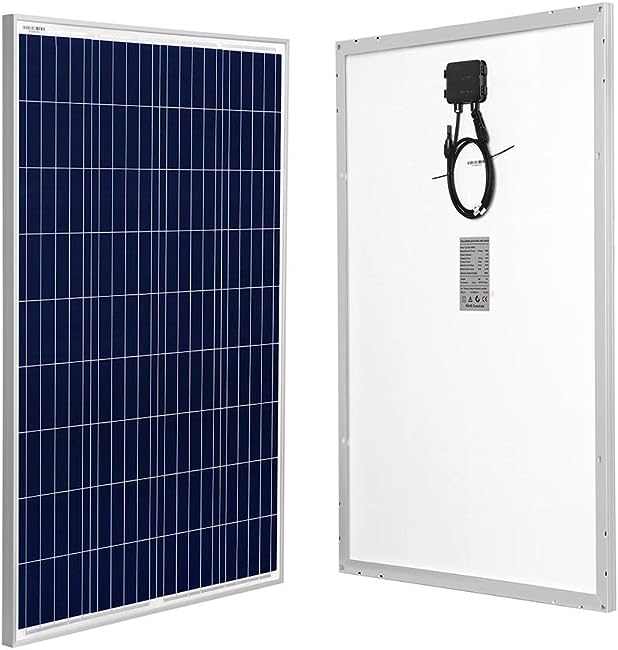 How are Polycrystalline Solar Panels Made of?

Polysilicon is usually extracted from Silicon rocks like Quartz. The rock or sand is loaded into a mold and heated for more than 20 hours to around 2500 degrees Fahrenheit. The resulting ingots are then cooled for up to 3 days.

In some cases, left-over fragments of monocrystalline are melted together in a mold into solid blocks. The ingots are then wire-cut into wafers that make polycrystalline photovoltaic cells.

Moreover, polysilicon PV panels are easily affected by high temperatures. High temperatures usually limit the free movement of electrons and reduce the efficiency of the panels. 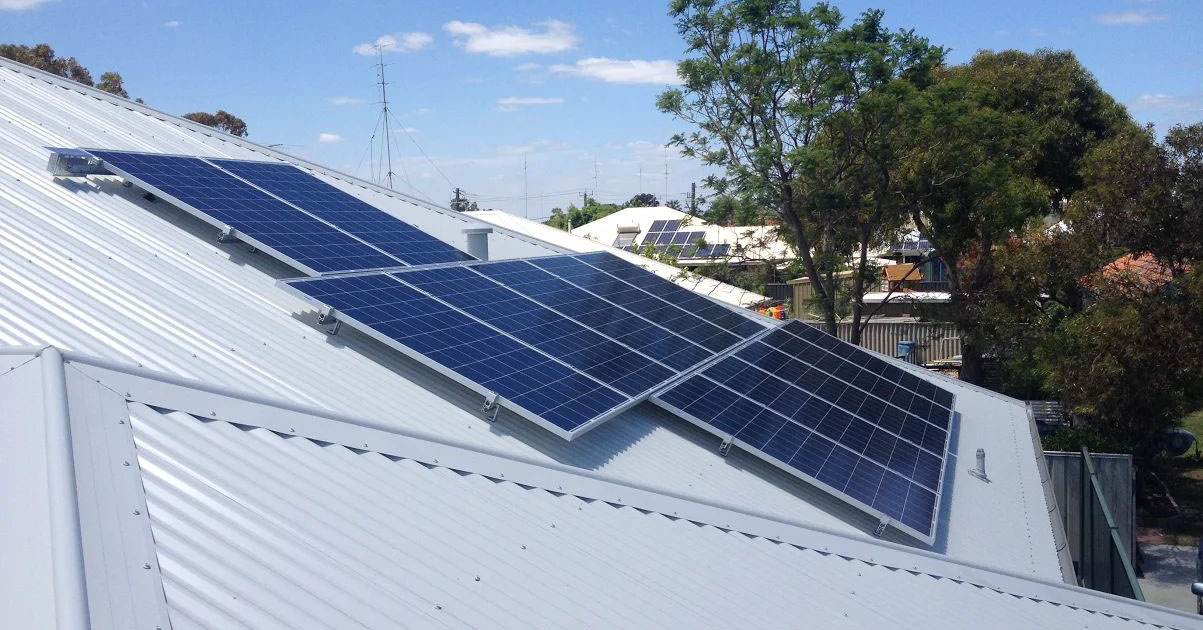 The main selling point of polysilicon PV panels is their price. The manufacturing process of multi-crystalline cells is much easier and less costly than the single crystal versions making them a pocket-friendly option for those who are not in a comfortable financial position.

As with any other type of solar panel, this type will as well require cleaning from time to time. Also, you need to inspect your panels regularly to check out for dirt, scratches, cracks, faults in the wiring, and more.

When to Use Polycrystalline Solar Panels

They are ideal if you are on a tight budget and have ample real estate on your roof to install them. They are commonly used in the following ways. 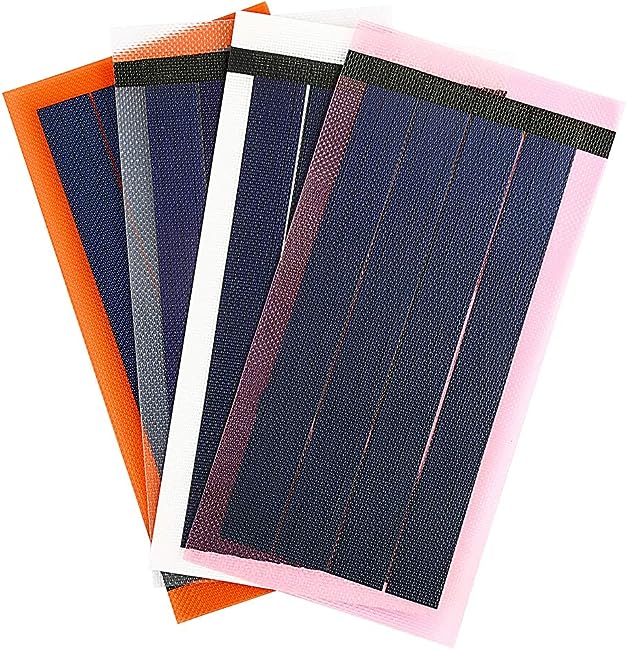 The other type of solar panel that is worth mentioning is the thin-film solar panel. True to its name, thin-film panels are made by embedding a thin layer of photovoltaic material onto a substrate made of glass, plastic, or metal. The result is a very thin and lightweight sheet of PV cells. Some are stick-on while others are flexible

Introduced in the 1970s with non-crystalline silicon as the main semi-conductor, innovations have seen many other materials being introduced as semi-conductors for thin-film PV modules. Their manufacturing process is the simplest and most cost-effective making most thin-film panels cheap to purchase.

How are Thin-film Solar Panels Made of?

Copper indium gallium selenide (CIGS) – CIGS is sandwiched between layers of conductors. These thin-film panels have very high efficiency with some prototypes clocking efficiencies in excess of 20%. On the flip side, these panels are outrageously expensive to produce making them out of reach to the average solar user. Also, they contain toxic chemicals making them less eco-friendly. 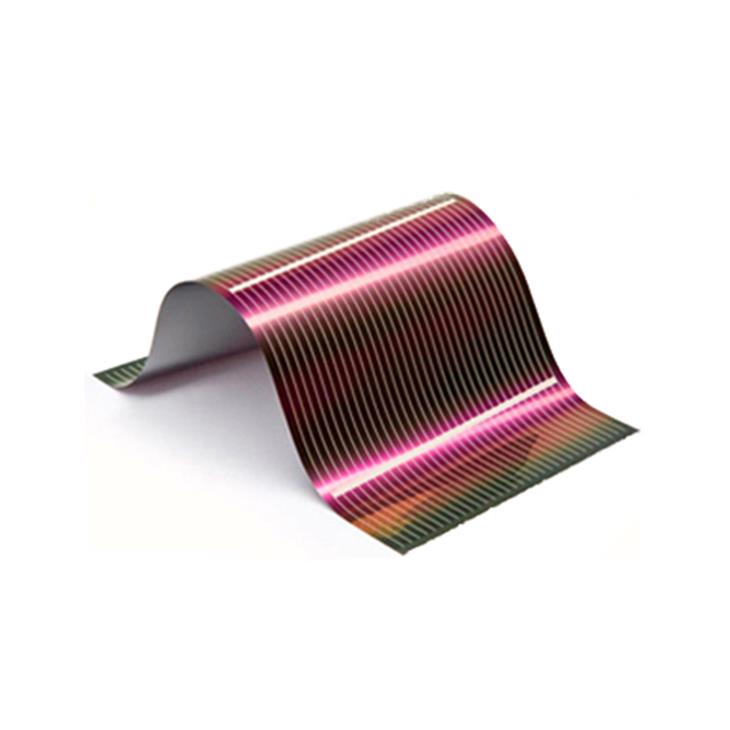 Cadmium telluride (CdTe) - It is the most used type of thin-film panel. They are moderately priced and have a considerable efficiency of about 10% – 12%. The downside is that Cadmium telluride is a very toxic compound making the manufacturing installation and disposal of panels a challenge.

It is the most uncommon material used due to its unachievable price. Gallium arsenide cells have very high prices, some reaching 30%. The outrageous price limits it to spacecraft and satellites.

Thin-film panels are known for very low efficiencies. Thankfully, recent improvements have significantly stepped up CdTe and CIGS reaching 21% efficiency. Higher than crystalline silicon. But the efficiency of thin-film panels typically ranges from 7% to 18% depending on the type of photovoltaic material used.

If you are in the market for solar panels with modest performance and convenient prices, you should check out thin-film panels. Most of these panels are considerably cheaper than crystalline silicon panels despite the lower energy conversion efficiency. They also require less photovoltaic material to manufacture than conventional poly- and monocrystalline solar modules making them more affordable

However, thin-film panels have short lifespans of around 10 – 15 years. Furthermore, some being flexible, they are less susceptible to cracks and are applicable on uneven surfaces.

When to Use Thin-film Solar Panels 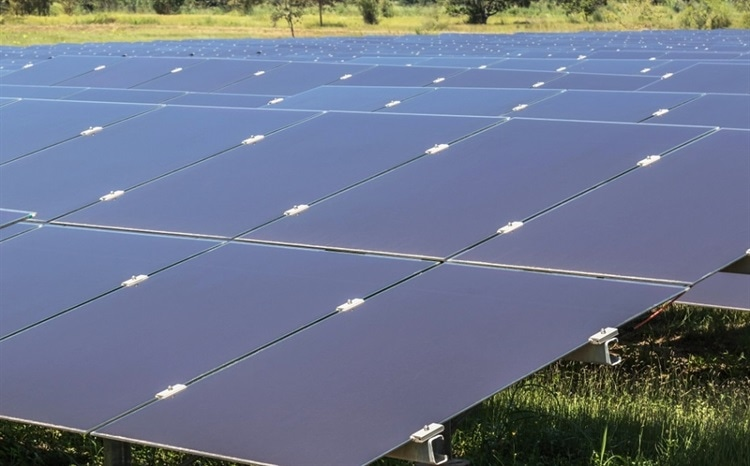 The first versions of thin-film solar panels were used in solar-powered devices like calculators and watches.

They are common in building integrated photovoltaic, photovoltaic glazing material that can is often laminated onto windows.

You will also find them on curved surfaces on buildings or vehicle roofs. Other manufacturers will fit these thin PV panels on clothing and backpacks for charging handheld devices.

1. What are Bifacial Solar Panels? 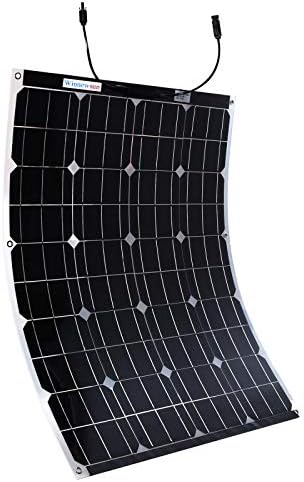 Bi facial or two-faced panels can generate electricity when sunrays land on the surface on either side of the panels. Simply put, unlike ordinary panels which have an opaque back sheet, both sides of bifacial panels have PV cells that produce power. This way, the power production is increased by up to 30%. Bifacial panels can either be monocrystalline or polycrystalline.

2. Which is the Most Efficient Solar Panel Type?

Monocrystalline panels are the most efficient with energy conversion ratios of up to 22%. The high efficiency owes to the single crystals the PV cells are made from which allow more room for movement for the electrons responsible for generating electricity and increases energy production.

3. Which is the Best Type of Solar Panel for a Motorhome?

The best type of panels for vehicles is thin-film panels. These panels are not only lightweight and easy to carry around but also flexible and easy to install onto curved parts of the automobile.

4. Which is the Best Type of Solar Panel for Home Use?

The best panels for home use are monocrystalline PV systems. They have a high rate of energy conversion and higher energy output. Also, you will not need a lot of space on your roof to install them.

5. Which is the Best Solar Panel Type for Camping?

Thin-film panels are best for users on the move who want to power their appliances. These panels are lightweight and easy to carry around without weighing you down.

6. Which is the Best Type of Solar Panel for Cloudy Conditions?

During cloudy conditions, solar energy is usually low. Therefore, you need a high-efficiency panel to make the most out of the little sunlight available. Thanks to their high efficiencies, we’d give monocrystalline panels a nod over the others in areas where exposure to sunlight is limited.

Whether you want to go solar to fix your increasing electricity rates or switch to more eco-friendly energy, we urge you to plow your money into it. Luckily, our post has given you an in-depth insight into the varied types of solar panels on the market. Simply single out the type that works best for you based on your budget, installation space, application, and environment, and you will be good to go. 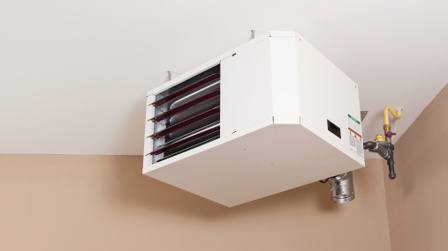 How to Maintain a Garage Heater 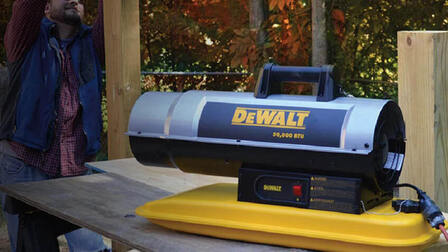 What Type of Heater Is Best for Jobsite and Garage? 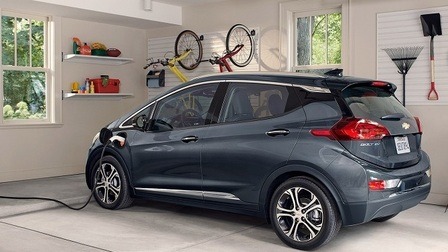 How to Keep Your Garage Warm in Winter 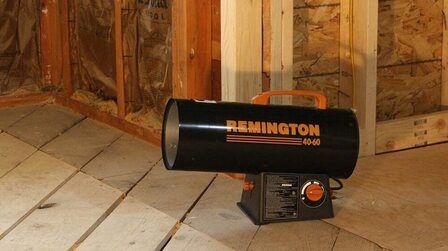 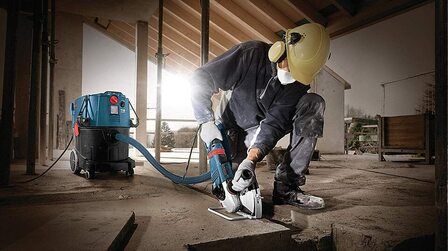 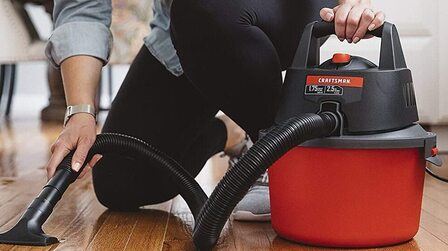 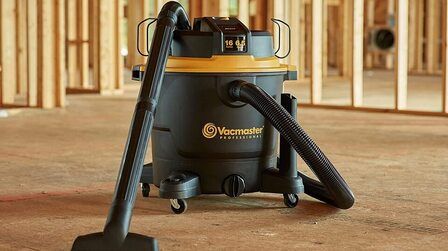 The Most Powerful Shop Vacs on The Market 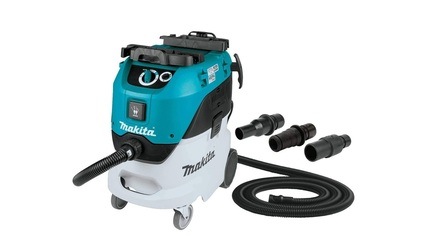 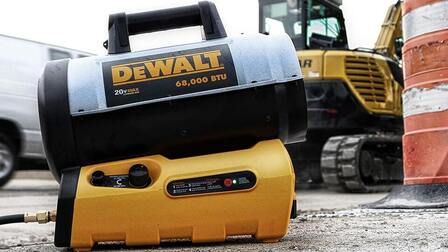 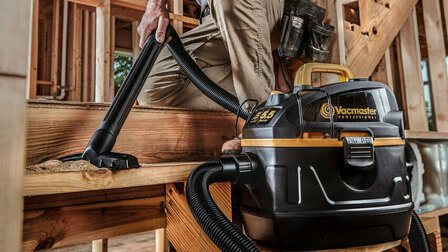 How to Use a Shop Vac: Step-By-Step Guide 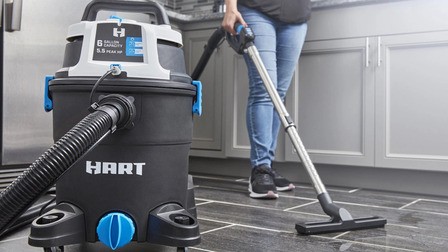 How to Empty Shop Vac
☰